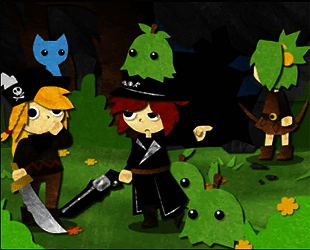 Battle over 120 types of monsters, collect over 140 types of equipment and use over 130 different skills and spells!
The long awaited sequel to Epic Battle Fantasy 3!
Play free games at Kongregate
FEB 1, 2014 12:47PM
EBF4: Battle Mountain has been released!

Everyone who owns the Premium Pack now has a new area to explore, with lots of new bosses and other challenges. Battle Mountain is accessible by Slime Cat.

The free version also has new bosses, and many gameplay changes.


Everything is controlled with the mouse, but you can also move around with the keyboard.
You can change the controls, quality, sounds and other stuff in the options menu.
Protip: Deleting cookies can delete your saves, so don’t do that. Chrome’s especially great at deleting your saves.
Updated to version 1.0.7! The only difference is that I’ve changed the compression method to something older. This means the game is slightly bigger, but it might fix some compatibility problems. Most people probably won’t notice a difference though. If you do, tell me plz.
Add your comment
Langganan: Posting Komentar (Atom)